I had a laugh to myself yesterday when on my Twitter feed someone had sent a tweet that mentioned that Ed Miliband has a "policy chief" - surely this must have been the easiest job in the world for the past 2 years?  (Incidentally, on further investigation the tweet was referring to Jon Cruddas, an MP, so one would assume he had other responsibilities). Yet amazingly today, Labour have announced a policy! Huzzah!  Now after all of this time to think I'm sure it's a very unique and revolutionary policy, so what is it?  Ah yes - fairer taxes...

Well, I guess we should be happy that they too believe in Fair taxes, maybe they have a different definition of fair, or come up with a new system that they feel is fairer, lets analyse.  From the announcement this is in two parts:

Now this sounds new, it's not like it's been in the news recently: here (August 2012), here (September 2012), here (November 2012), and here (February 2013).  It's not like this is a commonly acknowledge policy of another major party - that was even in a manifesto 3 years ago.
Now personally, I'm not sold on 'Mansion taxes' (that's for another post some other time however), it would depend on how and when they are paid, but at least Labour are suggesting something unique [/sarcasm].

Now I admit, it takes a big man to say he was wrong, at least Ed is just had to say the last guy was wrong, well, and himself as after Labour scrapped the 10p tax rate in 2008 to introduce a flat 20p tax he said:


"When you make a big set of changes in the tax system, some people do lose out. That is a matter of regret. Of course it is. But overall these changes make the tax system fairer."

This is a unique policy but is it necessarily the fairest option on the table?  Contrast this with the Liberal Democrats policy of increasing the Personal Allowance so that nobody on a standard set of hours on minimum wage would pay a penny in Income Tax you get two sets of results, both of which result in the lowest earners paying less tax.

The comparison is hard to make as they haven't specified the end limit to the tax band (as it would depend on how much the mansion tax would raise) but what is clear is that those who earn between the current personal allowance threshold and the Liberal Democrat proposed threshold would be worse off as they would be paying an additional 10p per pound tax on their income earned in this band.


It's good to see Labour are finally getting some policies together, at least this way it can be pointed out that they offer no real new ideas of substance to contrast with their own politically motivated attacks on every single measure the coalition proposes.  As long as they can come up with a catchy label for it they will attack it (for instance "Bedroom Tax" sounds a lot worse than "Reduction in benefits that are deemed excessive to the persons needs").

So yes, anyway, if you fancy supporting fairer taxes you can always sign up here, as you've been able to since the Liberal Democrats launched the site 3 months ago... a cynic would say that perhaps they only thought of the ideas after the Liberal Democrat's action day regarding this on Saturday.

I've just seen the Lib Dem Voice article on the subject which has the nice graph to illustrate point 2: 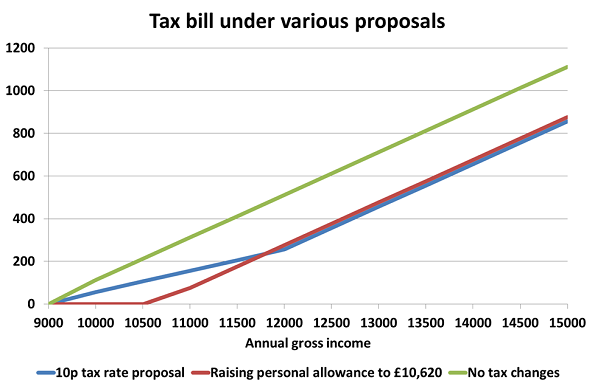