I have been rather busy of late, external auditors in my company, active social life and something personal on my mind (which may crop up in a future blog post when I finally contribute to the NHS debate that I've so far stayed away from).  As such I've been very bad at writing here - so bad in fact that when I've just looked I had six partially started but unfinished posts.  Five of these I have just deleted, they are no longer current so they wouldn't be relevant.  One of which I couldn't ignore though, for it is one of the major reasons I joined the Liberal Democrats and effectively my line in the sand - things may have moved on but I wanted to contribute anyway. 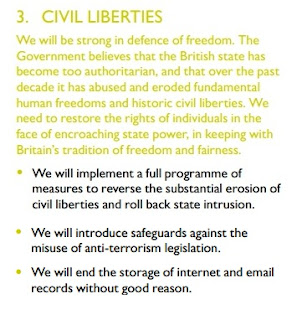 Now I can understand the argument that technology has moved on so the security services want to be able to have their current powers extended over newer technologies... however this doesn't fit with the plan of reversing the trend of eroding our civil liberties.  This argument also has the starting point that the current measures are necessary - of course the security services say they want more powers, they could happily infringe on people's liberties but that doesn't mean that they should have the right.  I think the best example of this is Mark Pack's excellent post on combating what is a real activity abused by criminals, terrorists and paedophiles.


I am reminded of the excellent Frank Turner's song with the following lyrics:

...'Cause a man who'd trade his liberty for a safe and dreamless sleep
Doesn't deserve the both of them and neither shall he keep...

Julian Huppert (Liberal Democrat MP) has been advertising an online petition which can be signed - follow the links here.

I have been quite a strong supporter of the Coalition, even when I wouldn't do the same, when I know our Ministers wouldn't do the same or even when I have actively disliked things I have still supported being in Government.  However if our civil liberties are eroded even further during the Coalition then what is the point in us even being there?  If this goes through I may even have to consider my membership as my main reason for being in interested in politics is civil liberties and the whole reason I joined the party.  For now I hold out faith that these measures wont see the light of day, we have to make sure that we don't surrender the smallest battle to the state or "we'll enter in a darkness that we never shall escape."
Posted by Radar at 02:58 1 comment: