In defence of Jimmy Carr... 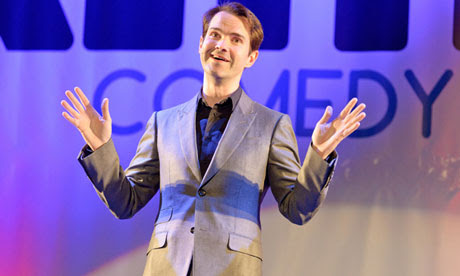 If you go to someone for advice and they look at your situation and ask you if you want to pay less tax, what would you do?  Okay, yeah, that's all the defence I have as it is a massive error in judgement - particularly as he has spent the last few years really laying in to bankers and Government austerity.


At the start of my accountancy career I worked in tax for over 2 years and I'd see it all the time, people just wouldn't have a clue about their own situation.  In those days most of my companies clients came through referrals from a company who had promised to reduce the tax bill of contractors by effectively making them self employed, the problem was they had just heard the bottom line figure they had been promised by a sales person and not taken in what they had signed up to.


These people weren't exactly the same as Jimmy, they were taking advantage of government incentives for the self employed (or were supposed to) to save a little bit on their tax bill as opposed to just paying 1%, so I doubt he was as naive as some of the people that I came across.  At the same time his situation is apparently legal, so I defy anyone reading this to say that they intentionally pay more tax than they legally have to.


I personally don't blame Jimmy, or any of the other celebrities/people who have been operating in this way, from taking advantage of the "loophole", I blame the people who allow this sort of arrangement to be in place to begin with.  You can't just blame the Tories for this, even if many of them have benefited (I believe George Osborne is due to pay a lot less in inheritance tax in the future because of his trust fund's 15% stake in Osborne & Little), you have to also blame Labour, who in 13 years didn't close down all of these schemes, and the Tories that came before them, and Labour before that...  People will always find a way to minimise tax, it's the Government's job to make sure that everyone pays their fair share and to not allow these schemes to exist.
Posted by Radar at 01:45 No comments:

Well according to UEFA it is.

Meanwhile Croatia have been fined €80,000 for their fans racist abuse of Super Mario Balotelli.

It's good to see punishments increasing (they have been pathetically low in the past for racism, in the past Croatia have also been fined the equivalent of under £15,000 for racist chanting against Emile Heskey) UEFA are still getting their priorities wrong.  It's one thing to talk a tough game against racism but surely their actions need to back this up.  (I wonder if there was also only an increase in the penalty to Croatia because of their fans being found guilty in 2008 as well?)


I would be a lot stricter.  This is at least their second offence, fine them (more) and make them play their next home qualifier behind closed doors.  If they offend again make them play the entire campaign without any fans.
Posted by Radar at 08:56 No comments:

Email ThisBlogThis!Share to TwitterShare to FacebookShare to Pinterest
Labels: Sport

Bad reporting and "research" can do more harm than good...

I've had quite a busy end of May/start of June so haven't had a chance to blog, or even keep up with most news stories (being out of the country/at a festival tends to cut you off).  However one story that caught my eye (well I couldn't miss it on the one day I bought a paper) "Young cannabis users 'do not realise the huge danger to their health'".  It particularly claims that smoking cannabis is 20 times worse than smoking cigarettes.

Now I welcome any attempt to improve the health of people and to educate people (particularly younger people) to the dangers of drug use - as I've often said, I would combat drug abuse through education rather than prohibition, however all this is doing is perpetuating a popular drug myth that has even been debunked on Wikipedia.  In fact most of the damage that is done comes from the fact it is commonly mixed with tobacco.

I was pleased to see when I returned home a rebuttal in my inbox from the excellent Professor David Nutt:

"The BLF’s lack of care with the evidence, and the media’s lack of care in fact-checking, could have the opposite effect from their good intentions. Public confidence in science as a means of getting to the truth can only be harmed when the BBC reports “experts” mistakenly declaring that what 88% of us apparently think about cannabis is wrong. What’s more, if the BLF’s misguided information is believed, people could actually be put at greater risk of lung cancer, for example by cutting down on the cannabis in their joints and padding them out with more tobacco, or by making parents relatively more relaxed about finding out that their teenagers smoking cigarettes every day than finding out that they smoke the occasional joint."

That paragraph I think picks up on one of the most important aspects.  I've known plenty of people (the amount of festivals I go to it's hard not to be exposed to it) who smoke the occasional joint - not even that, it's more of a social thing where they might have a couple of tokes.  Yes people can get addicted to it and some people do abuse it but very few of the people I know who smoke cannabis would be classed as regular users whereas 100% of my cigarette smoking friends are addicts.

I'd recommend that everyone reads Professor Nutt's piece, he's not some liberal who wants to end prohibition like me, he is just an expert who was fired by the former Labour Government for pointing out that their drugs policy didn't make sense, alcohol and tobacco being much worse for people than numerous restricted drugs.
Posted by Radar at 03:39 No comments: