The ugly face of football and I agree with Brian Moore.

I'm fed up.  After a wonderful Olympic summer, just 3 months into the Premiership season and I'm fed up.  The football itself has been top quality, Chelsea have looked fabulous at times with Oscar, Hazard and Mata,  United look frightening going forward whilst must be giving Fergie nightmares about their defending and other teams have been performing well above expectations.  I think the league this year is going to be just as close, with a three way battle rather than last year's two.

However like I said, I'm fed up.  Every single week there seems to be a different controversy, whether it's the many players 'diving' (you know who you are... Phil), trying to gain an advantage from unsporting behaviour, whether it's the R word, one or the other of them - Respect or Race, or whether it's the fans themselves.

Racism has no place in either modern society, or the prehistoric society that seems to exist on the football field.  I'm pleased to see that the Ferdinands are getting back on board with the Kick it Out campaign, this is one thing that players are better united, they should air their grievances within the body itself.

The latest things that have caused me despair of course come from the weekend.  It was a footballing treat, first Everton come from two goals down against Liverpool, then United win the battle of the top two (at the start of the weekend) in a dramatic 3 - 2 victory.  I've already mentioned Phil Neville's dive, there was also a bad tackle from Suarez that could have been red, the immature celebration following the first goal and the terrible decision costing Liverpool all 3 points (which followed from the very soft award of a free kick).  But what angered me the most in this game was players being targeted with missiles.  This happened in both games in fact, firstly Suarez had a coin thrown at him, he tucks it into his shoe for safe keeping. Secondly after Hernandez' controversial winner Chelsea fans apparently showered the pitch with missiles and then in the commotion a steward was injured.

Chelsea fans in fact proved to me throughout the game that (some) football fans lack class, every time Rio touched the ball he seemed to be booed... I don't think they understand how being the victim works.  (I'm not going to mention the punishment received by John Terry for the incident with Rio's brother).  This of course brings me to the main talking point... the referee.  Mark Clattenburg is accused of making racist comments to Chelsea's John Obi Mikel.  Now if Mr Clattenburg did make the comments that Chelsea allege then he will probably never referee again, and that is quite right.  But I find it a complete double standard as players effectively abuse referees all game long.  Watching on TV you know this to be true, when decisions go against them they always complain and if you can lip read you know it's not always the most pleasant conversation.  I find myself completely agreeing with Brian Moore who was apparently on BBC Radio 5 Live this morning:

He said: "Not only do you record these things you put them on the ref link so the crowd and sponsors can hear it. The pressure to change would be so great it would be carnage for six weeks but it would change within six weeks."


If Mark Clattenburg's mic had been linked to broadcasters then there'd be no doubt what he said, any punishment could be handled quickly and effectively.  Not only that but what players say to the referee could also be used against them much more often.  I think six weeks is being optimistic, but I do agree that eventually you'll see football player's attitudes improving remarkably which in turn could feed into the behaviour of the crowds - and if this happened I might not be so fed up.

(Also, if Hartlepool could get off the bottom of the table that might help!)
Posted by Radar at 02:35 No comments:

Email ThisBlogThis!Share to TwitterShare to FacebookShare to Pinterest
Labels: Sport

Twitter is a marvellous website and often allows you to see news happening first hand.  Well I say news, sometimes it's only newsworthy because of the person involved: 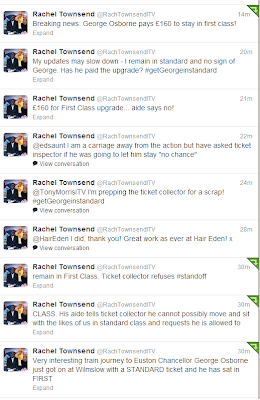 Obviously George Osborne still believes we are all in it together, just as long as he doesn't have to sit with the rest of us.  I hope that £160 came from his own pocket!

No matter how bad, nobody should be arrested for a joke.

I think it goes without saying that pretty much everyone agrees that what's happened to April is tragic, my thoughts are with her family.  I really hope she is found soon, although it is inconceivable that she'd still be with us.  How anyone could do that to her is completely beyond me, I hope that the truth comes out, the correct person is found and sentenced accordingly (I always believe in innocence before proven guilty but it sounds like the police are confident that it's Mark Bridger).

However, I don't want this post to be about this horrible story, I instead want to talk about Matthew Woods, who has been jailed for 12 weeks for posts made on his Facebook account.  The link of course is that these posts were 'jokes' about both April and Madeleine McCann.   He pleaded to sending by means of a public electronic communications network a message or other matter that is grossly offensive.

"Chairman of the bench, magistrate Bill Hudson, said his comments were so serious and "abhorrent" that he deserved the longest sentence they could pass, less a third to give credit for his early guilty plea."
"The reason for the sentence is the seriousness of the offence, the public outrage that has been caused and we felt there was no other sentence this court could have passed which conveys to you the abhorrence that many in society feel this crime should receive."

My main question is is this offence serious? As far as I'm concerned, nobody has the right not to be offended.  The charge itself - "grossly offensive" - is such a subjective opinion that I don't feel it has a place in a court of law.  From what I've read (I shan't repeat them) the jokes were definitely insensitive, in bad taste and crass, basically Matthew was stupid.  However I'm sure hundreds of other teenagers/young adults will have made similar 'sick' jokes over the past week - Matthew certainly wasn't the first, otherwise there wouldn't have been one on Sikipedia for him to basically copy.  If you don't think there are many out there just type Madeleine McCann into Google:

The third auto-fill suggestion is jokes regarding her.  This is sad but a true fact of society, when bad things happen, some people make jokes about it. I remember when Princess Diana died, a week or so later I started secondary school (in year 7) and I was already hearing jokes that would offend some people.  With the Twin Towers (9/11) it took a little longer, but it wasn't long before there were plenty of jokes doing the rounds.  Then with Madeleine McCann, I was doing pub quizzes where every week for a few months there'd be at least one team name that referred to her (in an attempt at comedy).  Some people even make money from it, the likes of Frankie Boyle have never shied away from this type of subject matter - in fact they are somewhat famous for offending certain people and sections of society.

At the end of the day, people can usually chose to avoid such 'jokes', for instance, I could have not attended the same pub quiz where I knew the names might have included references to Madeleine, I could unfollow Frankie Boyle from Twitter, but I don't because I don't feel grossly offended by the 'jokes', even if they are not to my taste.  In the same vein, anyone of Matthew Woods' friends could have unfriended him of Facebook, or even just stopped his updates appearing on their news feed.  It's not like you don't have a choice.

I agree with Dan Falchikov on Living on Words Alone:


"In a liberal democracy the state is not there to bolster the will of the majority - it is there to protect the minority - however unpopular and however moronic."

Apparently Matthew Woods had 50 people going to his home about the posts that he made, this sounds like almost a lynch mob.  The state should not be there to enforce the will of the mob, but to provide rational calm in such circumstances.  At the end of the day, who has been actually hurt by Matthew Woods' specific posts?  Only himself and his own future chances in life because of these charges.  The family may have been upset to read them, but they are only words (which pale into insignificance in the scheme of their passed week or so), and would they have even seen them if these charges hadn't been brought?
Posted by Radar at 04:09 No comments: