I have never been more scared...

I cannot believe that the Prime Minister, the most powerful person in our country has said:

"For too long, we have been a passively tolerant society, saying to our citizens: as long as you obey the law, we will leave you alone. It’s often meant we have stood neutral between different values. And that’s helped foster a narrative of extremism and grievance. This Government will conclusively turn the page on this failed approach."


I'm sorry Dave, but this approach is more likely to make people turn to extremism. Tolerance is one of those British values that we should be most proud.  Just a few days back in the job though, without Liberals holding his hand he is already back to preaching the politics of fear and using this to control the population how he sees fit.  We demonise Russia, China et al for the way that they try and control their citizens, yet somehow our Prime Minister thinks it's perfectly acceptable to do it here.  For the second time on this blog I'm going to quote Frank Turner.

At least they can't legally do some of the things that have been mentioned as the it is against peoples right to a private life as dictated by the Human Rights legislation that we have in place... oh... next blog for that I think.
Posted by Radar at 14:42 5 comments:

So, one week on and it still hurts.  Five years ago I posted a lot to Facebook campaigning and lost at least one friend in the process.  This year I didn't do that, I just had one eve of election day post, then one after voting.  As such, despite pounding the streets delivering leaflets I feel that I didn't give enough.  Honestly, I don't think I was expecting us to lose in Bath, I thought the council might slip (despite their excellent record, 100% of promises kept and no council tax rises) but not the seat as well.  Therefore I feel that I've at least slightly let the party down (not that I think I could have made the difference with a massive 3,883 majority now in the Tories favour) but still, I don't want to ever feel like this again, let alone because of politics, therefore I am determined that for the next 5 years I will do whatever I can to spread the positive message of Liberalism and of the great work that Liberal Democrats did in power and I'm sure will still do even as 8 people in opposition.

Genuinely devastated.
Feel for the hard working MPs who did great work as ministers and have lost their jobs, particularly gutted for:
• Lynne Featherstone, who spent the last Parliament pushing through equal marriage and promoting equal rights in the UK and throughout the world.
• Steve Webb, who's reforms as pension minister have been praised by pretty much everyone.
• Vince Cable, first senior politician to vocally stand up against Murdoch (even if he didn't mean to do it in public), prevented Tory culls on workers rights and removed exclusivity from zero hours contracts.
• Jo Swinson, who pushed through shared parental leave, childcare for 3 - 4 year olds and did so much work against the unrealistic photoshopped images that appear in the media. (I was hoping she'd be the next leader of the party)
• Stephen Gilbert, because I really liked the guy.

Only rays of light, Tim Farron holding on, as next party leader (it's going to happen), hopefully he can make his Left Liberal voice heard. Ed Balls losing (that would have made any Labour government much more tolerable for me).

I wonder how many people in Lib/Con marginals that voted Labour or Green are happy with their new Tory MP? It may not be right but we have a broken voting system and the rhetoric of the last five years seems to have reduced tactical voting, which in my opinion was a major reason why the Tories hadn't won a majority since 1992. I reckon in 2 - 3 years time lots of people will realise what a good job the 57 Liberal Democrat MPs did over the last 5 years.

In the cold light of day, I still think a majority Conservative government is possibly the worst of the potential outcomes for the country (though perhaps Tory/UKIP coalition could have been worse), but there are some reasons to be positive about the party's prospects in 5 years time.  Firstly, a Tory government straight after the coalition will help show exactly what the Liberal influence was in that coalition.  Already, one week on we are seeing the Tories talk about doing all of the things that Nick and his team obviously prevented over the last five years - this I think may turn a few heads back into our favour.  Secondly is of course the massive surge in membership over the past week.  At first I thought maybe it might just be members we lost returning, but it seems that only 12% of those fit this bill, instead I'm hoping that it's people who are as pissed off and determined as me to make sure that over the next 5 years we are heard. 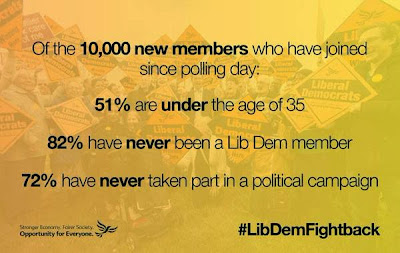