If you don't like Gay Marriages - then don't get one!

Yesterday was a good day, great in fact for supporters of equality everywhere.  The leader of the Free World, the President of the World's most influential country (for now) came out in full support of gay marriage.  Take a bow Barack Obama.  I assumed he'd sidestep the issue until at least after the next election, (or just positioning himself as slightly more liberal than his oponant - which isn't hard) but he didn't and for this he should be applauded.  BBC reports:


"The interview with ABC News was apparently hastily arranged as Mr Obama came under mounting pressure to clarify his position on the issue.

"At a certain point, I've just concluded that for me personally it is important for me to go ahead and affirm that I think same-sex couples should be able to get married," Mr Obama told ABC.

"I've stood on the side of broader equality for the LGBT community. I hesitated on gay marriage in part because I thought civil unions would be sufficient," Mr Obama said."

Hesitation or not it is still very brave of him to say so in the run up to an election, it may swing some voters against him though I really hope it doesn't. Over in the UK I'm disappointed by the sheer amount of idiotic negative arguments I hear.  The worst of all is of course that there 'should be other priorities'.  I mean come on, do you really think George Osborne is sat in Number 11 looking at the finer details of equal marriage legislation?  Of course he isn't!  Will he give it a small amount of consideration and then vote on the issue, I'm sure he will.   The excellent Lynne Featherstone also commented on this issue:

"I couldn’t help but notice a few naysayers popping up in the media and uttering dire warnings about a government that needs to concentrate on core issues rather than same sex civil marriage.

For goodness sake – it’s not either / or.

The economy is clearly the No 1 priority – but the Coalition can multi-task!"


There has been some talk lately that perhaps the plans are getting shelved since they weren't in the Queen's speech, however Mark Pack rightly points out (when is he ever not right?  I certainly haven't seen it!) this was never supposed to be in the Queen's Speech!

At the end of the day, my opinion is that marriage is celebrating the love two people have for one another.  Who is one person to say that two people's love for each other is less worthy than two others?  Anyone who feels that their own marriage will be devalued by more people getting married, well then perhaps they got married for the wrong reasons?  Perhaps if they really dislike them that much then they should just not get one themselves or not go to any ceremonies - would their lives be any different?

Anyway, a few pictures I've found online that I enjoyed/I think illustrate how ridiculous it is that this is even being argued about: 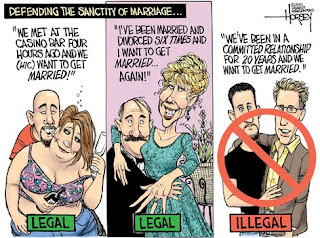 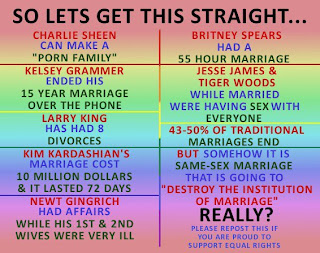